Trial period of the product has expired. The current trial product copy will be automatically blocked in 2 weeks. You can purchase the full version of the product on the site www.bitrix24.com. History of RSE on PCV "Republican blood center" of the MH of the RK

For the first time in 1934, the Kazakh branch of the Central Institute of blood transfusion (CIPK) was established in Almaty. Its first leader was Professor Alexander Nikolaevich Syzganov.

In 1937, the Kazakh branch of the TSIPK was renamed the Kazakh Institute of blood transfusion of the people's Commissariat of health of the Kazakh SSR.

In 1958, the technology of Lyophilic drying of plasma was introduced. Dry plasma had a long shelf life and did not require special transportation conditions, which made it available to all regions of Kazakhstan.

In 1962, the RSE moved to a new building, currently the Republican blood center of the Ministry of health of the Republic of Kazakhstan is located at the address: Almaty, Utepova STR., 1.

Professor O. S. Glozman has put into practice a method of treatment of hematological diseases of newborns by replacement blood transfusion. 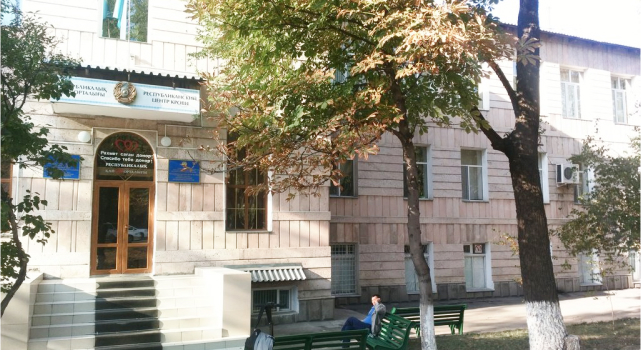 In 1964, the method of discrete donor plasmapheresis was introduced.

In 1966, the division of plasma protein fractionation was organized and the method of obtaining the first blood products proitein and fibrinogen was introduced.

In 1971, a laboratory for state quality control of blood components, preparations and blood substitutes was organized.

during the period of operation in 1981-1989, a new body for the production of blood products was put into operation. The volume of plasma processing has been increased to 40 thousand liters per year. Accordingly, the volume of production of blood products – albumin-increased to 88 thousand liters, staphylococcal immunoglobulin-to 21 thousand doses, cryoprecipitate-to 4.4 thousand doses.

In 1987, the method of double discrete plasmapheresis was introduced.

The First Blood Service Elisa laboratory has been opened at the RSCs, and screening of donor blood for HIV has begun.

The highest volume of prepared blood in the history of the RSCs was observed in 1988 - 30 thousand liters.

The new production of anti-pus plasma began in 1990.

In 1992, the first series of immunoglobulin against Crimean Hemorrhagic Fever was produced from the blood plasma of sick people.

In 1996, Elisa screening of donor blood for hepatitis C virus was introduced.

In 1996, screening of blood donors for hepatitis virus with Elisa method was introduced.

For the first time in 1997, the technology of long-term storage of red blood cells in liquid nitrogen was introduced using Sylab (Austria) technology.

In 1999, the method of apparatus plasmapheresis was introduced, which made it possible to automate the process of obtaining plasma from a donor, significantly improving its quality.

In 2004, the technology of leukofiltration of blood components was introduced.

In 2006, plasma quarantine technology was introduced.

In 2007, the Government of the Republic of Kazakhstan approved an industry program to improve the work of the Blood Service for 2008-2010, conducted technical re-equipment of the RKO, and trained qualified personnel.

In 2008, a quarterly monitoring of the main indicators of the Blood Service of the Republic of Kazakhstan was introduced, which made it possible to regularly conduct a comprehensive analysis, calculate the average Republican indicator for various areas of activity, identify "weak" links in the organization of the Blood Service as a whole, as well as the work of individual blood centers. Screening of donor blood for infection has been automated, and the method of column agglutination on an automatic Analyzer has been introduced to conduct a full range of immunohematological studies.

in cooperation with the CDC (Centers for Disease Control and Prevention), the development of the basics of activities and mechanisms for implementing transfusion councils in medical organizations has begun.

In 2015, a serological method for performing Hla studies was introduced and mastered: -Cross-Match; -Elisa antibodies; typing at 3 loci (a, B, DRB1), as well as photo documentation of test results for "cross-match" compatibility was introduced.

in addition, for oncohematological patients in 2015-2016, support for cadaveric transplantation using individual platelet selection and serological Cross-Match, Elisa Cross-Match, Elisa antibodies, typing at 3 loci (a, B, DRB1) was introduced.

In 2015-2017, typing on 5 loci (SSP- (A, B, C, DRB1, DQB1) was introduced. In addition, in 2016: development of flow fluorometry in luminex 100 at 5 high-resolution loci typing (SBT-A, B, C, DRB1, DQB1), antibody screening and determination of antibody specificity, introduction of serological phenotyping of personnel blood donors (CDC), and in 2017, chimerism studies for recipients after HJ transplantation stem cell Hla has improved cross-matching with totalcocktail.